Who we are today is a culmination of decades of migration patterns, births, and deaths. There are several factors influencing migration, ranging from economic opportunities, education, cost of living, and housing options to geopolitics, war, and natural disasters. Births and deaths are influenced by age, education, income, lifestyle, and health care — just to name a few. These factors change over time, causing a shift in the population dynamics of Colorado.

In order to plan for the needs of a community, including housing, schools, health care, infrastructure, and human services, it is important to understand its current population, economic conditions, and how it fits into the region and state, as well as how the factors are forecast to change over time. The largest transitions impacting Colorado include disparate growth, lower birth rates, aging population, slowing labor force growth, and increased racial and ethnic diversity.

Community trends are influenced by what is happening nationally and within the state. Growth in the United States has slowed to a 0.7 percent annual average rate, the lowest since the great depression in the 1930s. Between 2010 and 2017, Colorado’s population has increased by almost 560,000. This is an annual average growth rate of 1.5 percent. 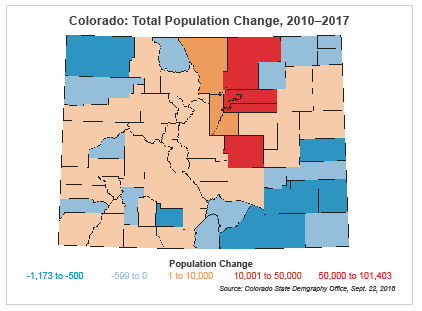 So what have been some of the drivers and barriers to growth throughout the state? Understanding how a community fits within the state and regional economy is important in planning for the future.

There are macro trends impacting births and deaths, but they are also impacted by local conditions, such as age, education, and cost of living. Total fertility (lifetime births per woman) has decreased in the United States from 2.1 in 1990 to 1.8 in chart below shows the trend in births, deaths, and natural increase since 1980. 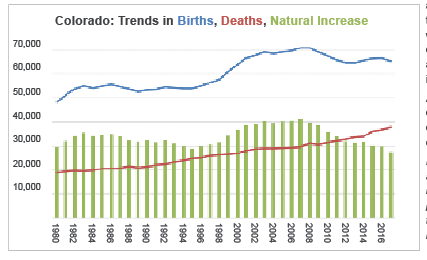 Tracking births is very important — especially in understanding the needs for schools. A decline or increase in births directly leads to changes in school enrollment and other service demands. When there are both decreasing births and increasing deaths, natural increase becomes smaller, or even becomes natural decline. Managing a community in a phase of natural decline brings its own set of challenges. Often, the counties with natural decline have a larger share of their populations over 65 years of age and are lacking young adults in the 25- to 44-year-old age range who would typically have children. The age of a community greatly impacts births and deaths, and migration greatly influences age.

Recommendation: Understand the age dynamics in your community by reviewing current age distribution, patterns of migration by age, and trends in births and deaths. It will influence the available workforce, housing, consumer spending, transportation, service demands, public finance, civic engagement, and more. There are several age analysis tools on the State Demography Office website under Population, Interactive Data, and Community Profiles.

Migration is the flow of people into and out of Colorado. Net migration takes the in-migrants (around 210,000 per year) and subtracts the out-migrants (around 150,000 per year since 2010). Migrants tend to be younger and have lower incomes and higher education levels than Colorado’s average population. Colorado’s largest positive net migration is dominated by the 22- to 34-year-olds, but this varies by location. A web tool showing net migration by age patterns for all counties can be found at the State Demography Office demographic dashboard, gis.dola.colorado.gov/apps/demographic_dashboard. 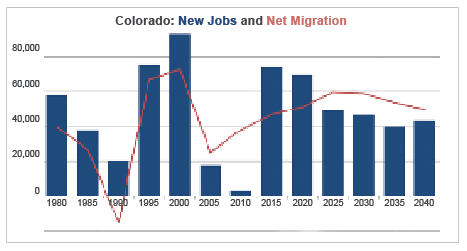 Migration patterns are strongly linked to job and educational opportunities. Understanding the levels of migration and characteristics and how they are changing is important in developing programs for communities. Since migrants tend to be younger, and younger adults tend to have kids, the migration patterns in Colorado are critical in understanding the future service demands. Migration is influenced by the types of industries growing and shrinking, the skill sets of workers, and Colorado’s comparative strength to other states. The chart above shows the pattern of job growth and net migration over time.

Colorado ranks third in the United States in employment growth since 2010. Health services, professional and technical services, accommodations, and food service industries generate 47 percent of the total employment growth. Analyzing the growth by 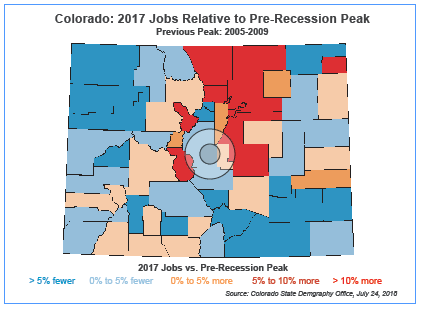 industry and wage allows for researchers and policy makers to evaluate the type of job growth Colorado has been experiencing and the types of housing and other services that may be needed in the future.

Job growth across the state has been disparate. The map below shows job growth by county from pre-recession peak levels through 2017. The economic recovery from the recession has not been equally enjoyed by all counties. The counties shaded blue have lower employment than pre-recession peak levels. This is partially explained by the jobs that have helped to support the recovery. Health care services are dominant in areas with larger population centers, and professional and technical services thrive in metropolitan areas and areas with full broadband infrastructure.

Recommendation: Utilize the employment data, charts, and maps that are available on the State Demographic Office website.

Age is a dominant force when understanding most trends in the state because age impacts preferences, spending, housing needs, community service demands, labor force participation, and more. Colorado is one of the youngest states, with the sixth lowest share of its population older than 65 years old, and is the third fastest-aging state, with an annual growth rate of 4.8 percent for those 65 and older. Between 2010 and 2017, the 65-plus population has increased by 217,000, while the total population has increased by 560,000. The growth of the 65-plus population has been 38 percent of the total growth in the state, yet this age group represents only 13 percent of the population. 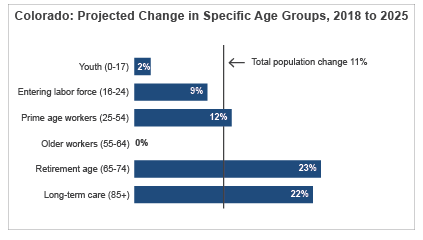 Colorado has very few people older than 65 due to years of migration trends attracting primarily young adults. Today, 95 percent of the growth in Colorado’s 65-and-older population is people who in-migrated over the years and are aging in place.

Due to aging trends, Colorado will experience faster growth in industries supporting the aging population, such as health care.

The current tight labor force is also due in part to the aging of Colorado, with the fastest growth in retirees it has ever experienced as well as slower growth in new entrants. The chart below shows the growth rate of the population by age and age relationship to the labor force. One concern is whether Colorado will be able to retain and attract a labor force sufficient to fill the needs of the job market or whether a lack of a labor force will constrain growth.

Strategies to keep Colorado competitive include increasing labor force participation in all age groups and ensuring all Coloradans have the education and skills needed to meet the demands of growing industries.

Historically, Colorado’s younger population is more racially and ethnically diverse than older generations. For the population under the age of 24, people of color make up 40 percent of the total population, compared to the population over 65, of which they make up 16 percent.

Due to Colorado’s race and ethnic diversity by age, the fastest growth in the labor force is people of color. Colorado’s disparity in educational attainment by race and ethnicity is a challenge. Colorado has the second largest achievement gap (30 points) for a bachelor’s degree or higher  between its Hispanic and White non-Hispanic population in the country.

Recommendation: Increase educational achievement of Coloradans, and create opportunities for youth to investigate occupational prospects at an early age to align education and career pathways.

The decelerating population forecast is due to a slowing national economy, birth rates, and international migration as well as an aging population and declining labor force growth. Although Colorado’s growth is forecast to slow, it is projected to grow twice as fast as the nation.

Colorado’s growth is dependent on several factors, ranging from industrial competitiveness, labor force preparedness, and cost of living to age, birth rates, income, and health care. These factors change over time — some more abruptly than others. In order to plan for the needs of a community, it is important to understand its current population and economic conditions and how the factors are forecast to change over time. Some factors can be planned for, such as reduced birth rates or increased demand for housing; others need to be researched to understand the relative risk, such as industrial transitions or shifts in the climate. The State Demography Office and other offices within the Colorado Department of Local Affairs have information and resources to help communities plan for the future. 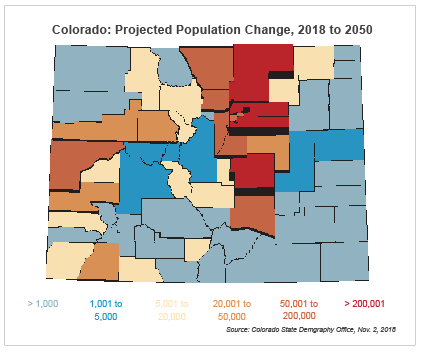